The Baird Liberal Government has failed to meet the on-time running target for Sydney Buses in each of the past three years, according to the independent Auditor-General’s report into the performance of Sydney’s public transport.

Sydney Buses has failed to meet its 95 per cent on-time running target – self-imposed by the government – for the past three years in the four metropolitan regions in which it operates bus routes (see graphic attached).

“Sydney Buses is responsible for transporting about 640,000 people each day to work, school and to the shops and over the past three years, it has consistently failed to meet its 95 per cent on-time running target,” Shadow Minister for Transport & Infrastructure Ryan Park said.

“Sydney Buses operates services in some of the busiest transport corridors in Sydney. Failing to meet its on-time running target means thousands of mums and dads are kept away from their families longer when buses are delayed or fail to show up at all.

“On-time running is one of the most important criteria that makes public transport attractive and an alternative to jumping in the car – if buses are late, overcrowded and skipping stops, it will turn people off at a time when we need to be encouraging greater public transport use in our city.

“We know that in many international comparisons Sydney gets marked down heavily on public transport and this is the reason why – setting on-time running targets and then failing to put in place an continuous improvement model to not just meet but exceed the targets.

“The Baird Government must be held to account on promises it has made to bus commuters – if the government is going to set a 95 per cent on-time running target, what is the government’s plan to meet it?’

Mr Park said if the Baird Government was failing to meet the on-time running target for Sydney Buses now, what chance would it have when the construction of the CBD & Eastern Suburbs Light Rail is in full swing and entire bus routes are displaced when George Street becomes a “no go zone.”

“Transport Minister Andrew Constance has no idea what the challenge of keeping the buses running on time will be like when the entire city is thrown into chaos by tearing up of the city’s busiest main street for the CBD Light Rail.” 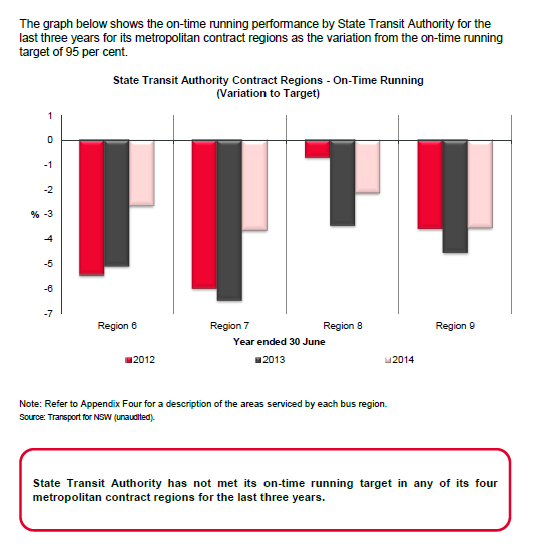